Nudging, wiggling, shaking, and dragging will only carry you so far when it comes to scoring well on puzzles. At some point these methods don't gain any more points and it's then time to start trying other approaches. One of the most important of these is called flipping sidechains: there doesn't seem to be too much about it in the wiki so here's a quick introduction.

Briefly, the steps are these:

Here's an example of this technique in action. 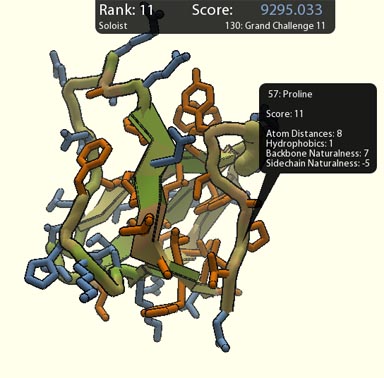 1) Here's a protein, and the sidechain to be flipped is that of the 57th amino acid, which happens to be a proline. Prolines look like a pentagon one side of which is the backbone itself.

Sidenote: the black box that contains information about each amino acid can be brought up by going into Note mode and shift-clicking anywhere on the amino acid, or in any mode by pressing Tab while selecting or hovering over the amino acid. The most useful information here is the first line which identifies the type of the amino acid and its position within the protein: this serves as a convenient reference point. The other items are composites of the many variables that go into determining the energy function. 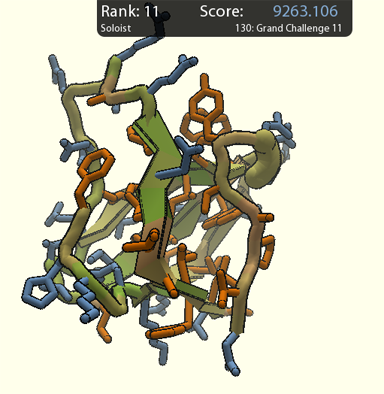 2) Grab the sidechain of that amino acid and drag it. It will flip into a new position (note that it's been bent back), and the score will go down. 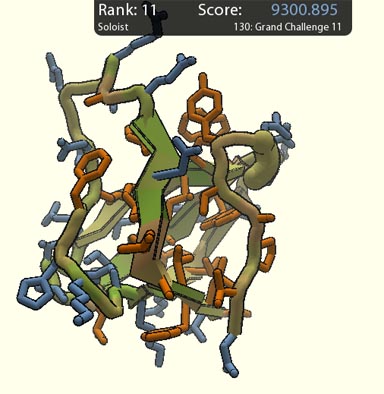 3) Now wiggle, and the backbone will readjust itself as best it can to reflect the new position of the sidechain. The score goes up to a new high, 5 points higher than the original, which is on the low side as far as sidechain manipulations go. Shake and wiggle again: as it happens no improvement is seen in this case.

This example is a little unusual in that a single wiggle after flipping is sufficient to get a new high score. Normally an additional shake and wiggle is necessary to see any gain.

Finally, after a successful flip, nudge the protein and then wiggle. Do this a few times: you will usually get several extra points this way. Only then is it permissible to celebrate with a trip to the refrigerator.

Flipping is a slightly unfortunate term because it suggests that a sidechain can be in one or other of two states and that you can toggle between them like a light switch. In fact some sidechains can't be moved at all while others can take up more than two positions.

Sidenote: These individual positions are called rotamers, and the number possible for each amino acid varies according to the number of ways the sidechain can rotate. Amino acids with long flexible sidechains like lysine can have many, while others like glycine can have just one. FoldIt used to have a slider which allowed you to select individual rotamers precisely and also told you how many there were for a particular amino acid: I wish they'd bring this or something like it back. To change between different rotamers now, go into selection interface, hover over a selected sidechain, and press the left or right arrow keys.

Which sidechain to flip? Good question. Ultimately, a lot comes down to human intuition and spatial ability, but some general observations can be made. Sidechains in the middle of the protein tend to work better than those on the outside. Also, when you flip a sidechain, pay attention to how much the score decreases. If it's too little, perhaps less than 30, you are unlikely to see a subsequent gain. If it's too much (>1000 but the number varies wildly) the protein will fall apart when you do the wiggle and writhe around the screen like a wounded snake. This is quite entertaining to watch the first couple of times and the protein will eventually settle down to some approximation of its original position, but the chance of getting a better score is vanishingly small. Another point: there seems no particular advantage or disadvantage to flipping sidechains which have issues.

This technique doesn't work every time you try it: nothing in FoldIt does! But it's quick to try, and works sufficiently often to make it one of the most important techniques in the game.

There are a lot of variations possible on this theme. Here's one. 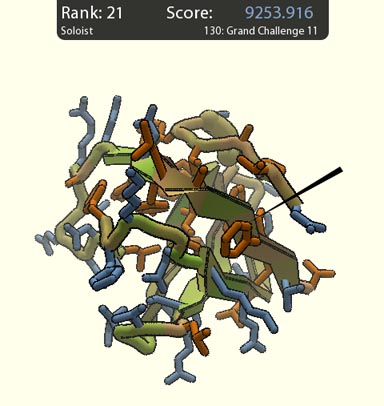 1) The sidechain to be flipped is that of the indicated phenylalanine. The sidechain of this amino acid looks like a hexagon attached to the backbone by a stalk. 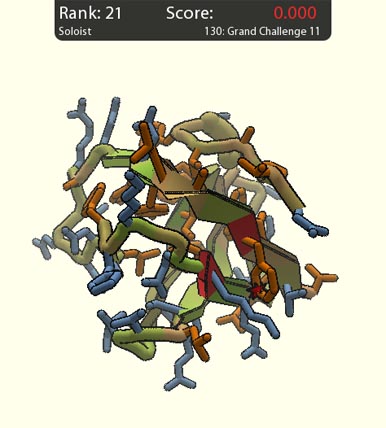 2) Flipping it causes the score to go down to zero: you can see the clash indicator as a red star. Wiggling now would simply cause the protein to fly apart. 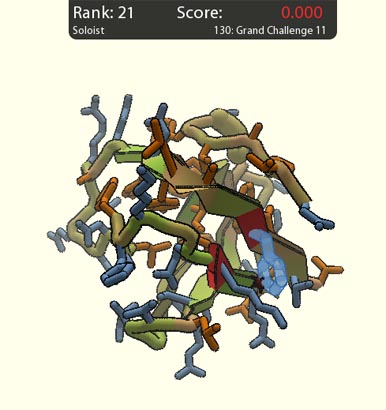 3) Now freeze that sidechain by shift-clicking it. 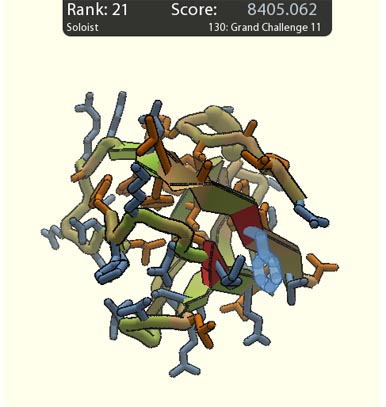 4) And do a Shake All. This causes some of the amino acids around the frozen phenylalanine to adopt new positions forming a lower energy configuration so the score goes up to about 800 points less than what we originally started with: a much more reasonable value.

If more control over this particular process is needed, it's possible to double-click the sidechains of an amino acid adjacent to the frozen one: this causes the sidechain of that amino acid to adopt its lowest energy configuration. 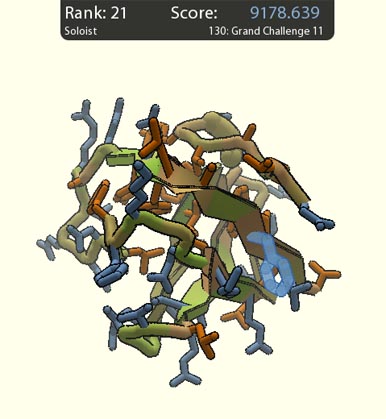 5) Wiggle. the score goes up to 85 points less than the starting value. 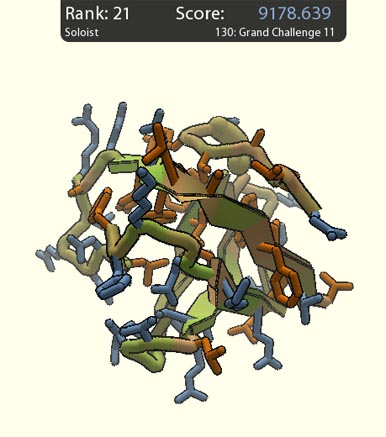 6) Unfreeze the phenylalanine by shift-clicking it, or by hitting F if nothing else is locked. 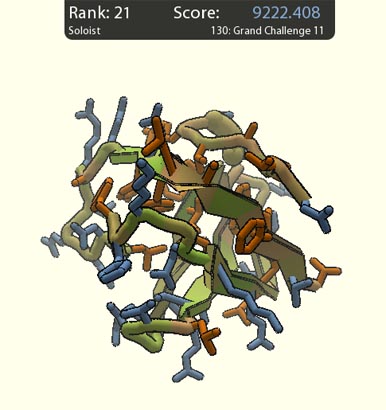 7) Shake. Only 30 points below the original best. 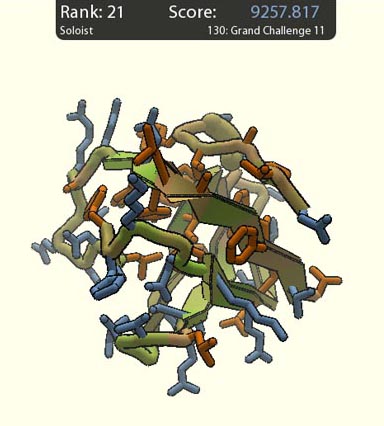 8) And finally wiggle to get a new high score.

Retrieved from "https://foldit.fandom.com/wiki/Sidechain_flipping?oldid=23489"
Community content is available under CC-BY-SA unless otherwise noted.