The images in this gallery show the amino acid sidechains with atoms that can form hydrogen bonds.

The atom number of each bondable atom is shown. See the "Details" section below for more. 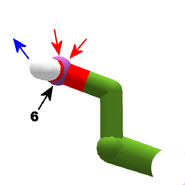 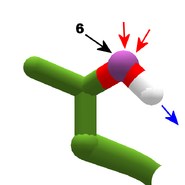 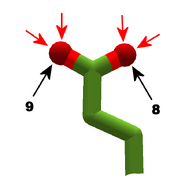 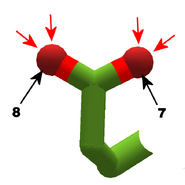 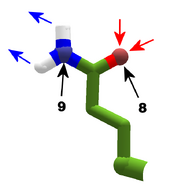 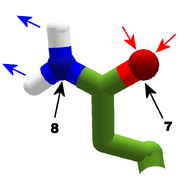 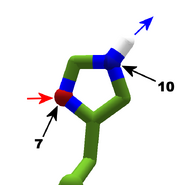 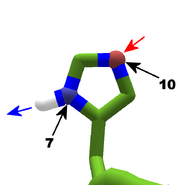 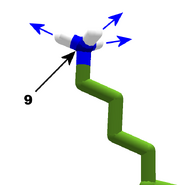 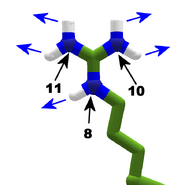 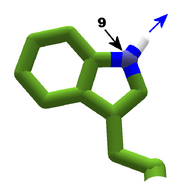 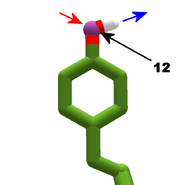 Many amino acid sidechains contain oxygen and nitrogen atoms that can act as hydrogen bond donors or acceptors.

In View Options, the "show bondable atoms" option, combined with "show bonds (sidechain)", highlights the donors with blue spheres, and acceptors with red spheres. Some atoms can act as either a donor or acceptor, which is shown with a purple sphere.

Usually, nitrogen is a donor, but as the gallery shows, one of the nitrogens in histidine acts as an acceptor.

Oxygen is either an acceptor, or a acceptor/donor, as in serine, threonine, and tyrosine.

The view in this gallery is a combination of "cartoon thin" and "stick plus polar H". The "polar H" option reveals the hydrogen atoms, which normally aren't shown. In this view, hydrogens appear as white "caps" near a blue nitrogen or a red oxygen atom.

The atom numbers can be used when creating bands in a Foldit recipe.

Histidine is a special case, with two tautomers. In one tautomer, atom 10 is a donor, and atom 7 is an acceptor. In the other tautomer, the roles are reversed. Both atom 7 and 10 are nitrogen. The difference is which nitrogen has a hydrogen attached. See Are all Histidines in Foldit the same? for more detail.

This gallery is based on this hydrogen bonding diagram, from Birkbeck College's online Principles of Protein Structures.

Note that the two sulfur-containing sidechains, cysteine and methionine, aren't included here. The sulfur in methionine doesn't form additional bonds, while the sulfur at the tip of cysteine can form a disulfide bridge, which is type of covalent bond. Covalent bonds are much stronger than hydrogen bonds.

Retrieved from "https://foldit.fandom.com/wiki/Sidechain_Bonding_Gallery?oldid=28172"
Community content is available under CC-BY-SA unless otherwise noted.