Edit
watch 01:36
We're Getting Mutants in the MCU - The Loop
Do you like this video?
Play Sound

Nucleotides are usually referred to as "bases", short for "nucleobase". The nucleobase is the unique part of the nucleotide, similar to the sidechain of an amino acid.

Puzzle 1463: Classroom Puzzle: HIV RNA is an example of a Foldit puzzle made up completely of RNA. Puzzle 1463 is the first successful RNA puzzle in Foldit. An earlier version of the puzzle was shut down early due to technical glitches.

While proteins can be made of 20 different amino acids, RNA is made of only 4 different bases (nucleotides): guanine, uracil, adenine and cytosine.

As with the amino acids, each of the RNA nucleotides has an identical backbone section. Instead of sidechain, the each nucleotide has a unique nucleobase. In Foldit's "cartoon" views, the nucleobase and a hydroxyl group (an oxygen atom plus a normally invisible hydrogen) are shown projecting from the backbone.

The coloring reflects the tendency of guanine to pair with cytosine and adenine to pair with uracil via strong hydrogen bonds. This type of bonding is similar to what happens between the bases of DNA, except that uracil is replaced by its chemical cousin thymine in DNA.

In DNA, this type of bonding between bases spans the two helixes of the double helix. RNA is only a single helix, but can double back on itself to allow this type of bonding. RNA can have many different structures, however, so other patterns of hydrogen bonding are common as well.

Many Foldit tools and functions are available for RNA, and work in much the same way as they do for proteins. Each nucleotide in an RNA chain is treated as a segment, and numbered like the segments in a protein. Hovering over a nucleotide and hitting the tab key displays a segment information window identifying the nucleotide and reporting score information.

The Foldit tools shake and wiggle work on RNA in much the same as they do on protein. bands can be created manually or by a recipe, and follow the same rules as for proteins.

The Foldit Lua function structure.GetAminoAcid returns two-letter codes for RNA: "rg" to guanine, "ru" for uracil, "ra" for adenine, and "rc" for cytosine.

The Foldit Lua functions structure.GetSecondaryStructure always returns "H" for helix for RNA. Unlike a protein, the secondary structure of RNA can't be changed.

Other Foldit tools and functions aren't available for RNA. The rebuild and remix tools aren't available, since they draw from databases of protein shapes. Cutpoints are not available, and the tweak tool produces an error message "action not permitted on RNA" if you attempt to straighten or rotate RNA.

The gallery shows nucleobase and hydroxyl group for each RNA nucleotide. The Foldit atom numbers are shown in black. See RNA backbone for backbone atom numbering. 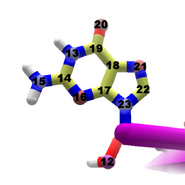 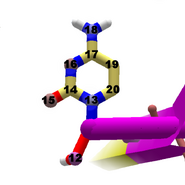 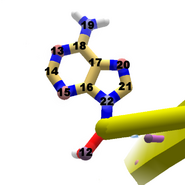 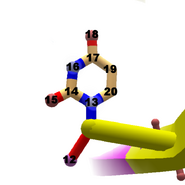 The view options are a combination of "cartoon" and "stick + polar H". The coloring option is "hydro/score + CPK". The atom numbers shown are valid for RNA, but will be different for DNA, which has a different backbone.