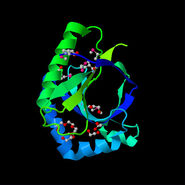 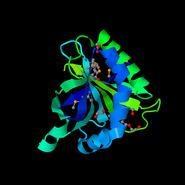 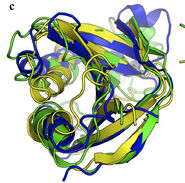 234 Mark in green native in blue

Puzzle # 438, Electron Density 1, was the first puzzle to use the concept of electron density as a guide for players. Electron density is the measure of the probability of an electron being present at a specific location. Density was presented as a map with adjustable tolerances, the smaller the tolerance, the more likely the protein might conform to the native structure, if matched to fall within the density boundaries.

Like Quest To The Native and similar puzzles, the object is to match the guide as closely as possible. Unlike QTTNs, the actual structure of the protein is unknown.

BootsMcGraw, scoring 11940 for a third place finish, started this puzzle by first manually rebuilding the loops to fall within the density map as closely as possible. Once the structure more or less matched the guide, Boots turned off the guide and set in place one of the many Quake-style compressor scripts until the score stopped increasing. At this point, one of the auto-rebuild scripts was implemented until it stopped yielding points. The resulting structure was compared to the guide, and more manual rebuilding and compression was done until no more points were found. The puzzle was then walked for a few more points.

Banding to this Electron Density cloud was quite an adventure. Here are some rough and ready tips from my first pass: 1. use initial alignment and don't touch the Move Tool until banding complete 2. Band from one structure at a time, doing the easy cases first and then using these as aids to interpolation for the hard ones.