A protein designed by fiendish_ghoul in this puzzle has become a solved Foldit design, the fifth player-designed protein to achieve this distinction. The protein is named "Foldit4", and appears in the PDB as 6WI5.

As detailed in Foldit Lab Report #8: Check the Fridge, a crystallized sample of this protein was discovered in a refrigerator in the Baker Lab. The protein missed publication with the first four solved designs, but will be covered in an upcoming paper.

The same protein has appeared and an electron density in Puzzle 1847.

Unfortunately, fiendish_ghoul did not share any images for this puzzle, but the image from the PDB is shown here for reference. 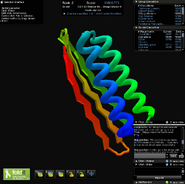 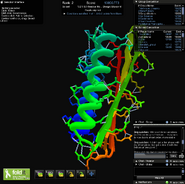 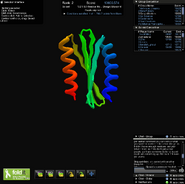 S35 Skippysk8s 10120
Add a photo to this gallery
Retrieved from "https://foldit.fandom.com/wiki/Puzzle_1321?oldid=33779"
Community content is available under CC-BY-SA unless otherwise noted.