The protein in question, a retroviral protease, had been known for 15 years. It had been solved by NMR (nuclear magnetic resonance) in 2003, but the NMR results were inconsistent with results from X-ray crystallography.

The puzzle used the alignment tool which allowed players to use partial threading to select portions of different models.

The Foldit Contenders group was listed as one of the authors of the paper "Crystal structure of a monomeric retroviral protease solved by protein folding game players", published in Nature Structural & Molecular Biology in 2011. See the complete paper.

The contributions of Contenders players spvinvent, grabhorn, and mimi are described in one of the figures.

(The Void Crushers group is also an author of the paper, and the group's CASP 9 work is discussed.)

The Contenders were also cited on the PDB entry: 3SQF. (The divergent NMR results are available as PDB entry 1NSO.)

The protein was posted again in Puzzle 460, as a quest to the native" (QTTN) puzzle.

This protein was also revisited in Puzzle 712, but for some reason, no images were captured for the wiki. 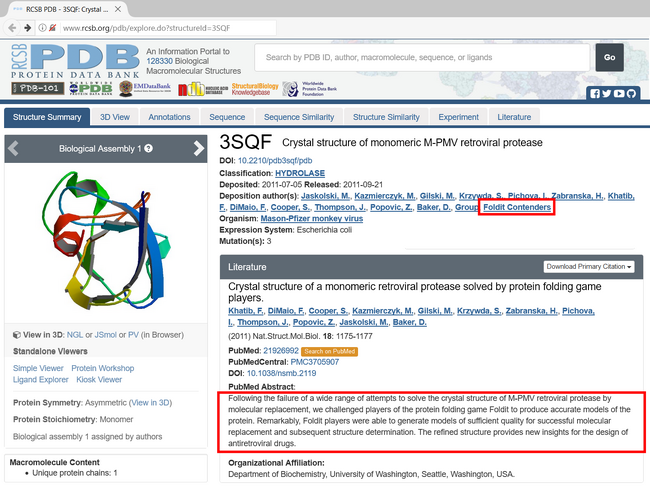