Edit
watch 01:36
We're Getting Mutants in the MCU - The Loop
Do you like this video?
Play Sound

DNA is of course the famous double helix, which encodes the genetic information cells use to build proteins. So far, DNA has made only limited appearances in Foldit. The intro puzzles DNA Pairing and DNA and Protein show what's possible. No Foldit sciences puzzles to date have included DNA, however.

DNA is closely related to RNA, which has started to appear in science puzzles. Both DNA and RNA are "nucleic acids", made up of combinations of four different "nucleotides" or "bases". DNA and RNA share the bases adenine, guanine, and cytosine. Where RNA can contain uracil, DNA has the similar base thymine instead.

The bases are similar to the amino acids that make up proteins. Bases can be linked together in a polymer chain to form larger molecules. Like amino acids, bases have a common backbone. "Base" is short for "nucleobase", the part that's attached to the backbone. The base is what makes each nucleotide different, like the sidechain of a protein.

The gallery below shows the four DNA bases, as seen in the "DNA pairing" intro puzzle. See DNA backbone for details of the backbone structure of DNA. 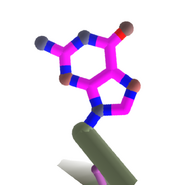 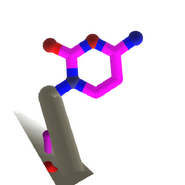 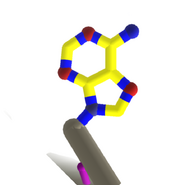 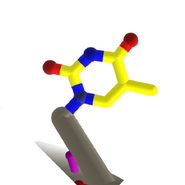