Aesthetics in FoldIt is something of a catchall. In part, it's all those things that are difficult to explain but seem to make sense and to help a folder fold.

Some proteins can have very unusual shapes so see this text as a general guide. See in PDB and in this sunburst to see the most common shape of domains (part of proteins) and proteins (more here).

But really, it's more about the inherent beauty of a well-folded protein. A compact, efficient shape will have a certain flow to it. It will, to the trained eye, appear beautiful. At least we hope. Otherwise this article won't be very informative, even after we've mastered the art of protein folding.

Here are some suggestions on good FoldIt aesthetics. No protein follows them perfectly, but all well-folded proteins will follow them to some extent, and having a good sense of aesthetics will make you a better judge of what shapes to try for when folding.

Helices: A helix will only very rarely have a serious kink in it. They will, however, commonly bend or curve. This is normal and part of a great many protein folds. It is possible, therefore, to overuse the "straighten" Tweak and force a helix into an overly rigid shape. This is contrary to good FoldIt Aesthetics.

Sheets: Sheets also bend, but it's important to remember that they bend gracefully and usually not with any sharp, sudden, turns, and not with any turns veering quickly back and forth from one amino acid to the next. If these kinds of turns appear, it may be good to straighten them a bit, or else to see what nearby structures may be forcing them into this bad configuration.

Loops: Loops are the wildcards. They can go nearly any which way, and in fact, that's often what they are supposed to do.

Global Aesthetics: Globally, many proteins should approximate a sphere, unless they are known to be part of a larger structure, as were Halorhodopsin and Fibronectin, neither of which was spherical in the highest-scoring folds. The so-called globular proteins include most enzymes and other proteins meant to circulate freely in the body.

Not only should the typical protein often be spherical, but there should be some amount of balance to it: Sheets tend usually (but not always) to be in the middle of the sphere, connected by hydrogen bonds and helices will be arranged on opposite sides of them. 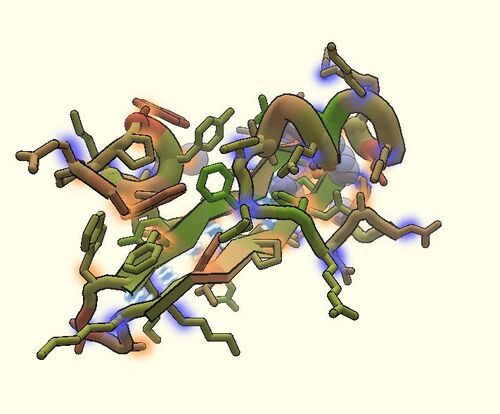 This protein shows good aesthetics: The sheets are relatively well-hidden and straight. They are connected by hydrogen bonds. The entire structure is relatively compact. One helix is clearly on one side of the sheets, while the other is mostly on the other side. 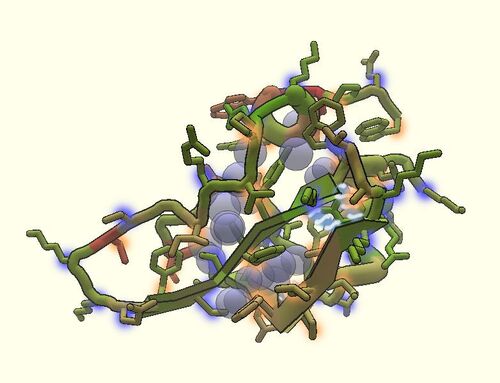 This protein shows bad aesthetics: The sheets are very exposed, unbonded, and severely bent (note the lower central part of the fold, where one sheet makes a sharp turn toward the back of the structure). The fold is perhaps more compact than the one shown above, but both helices are on the same side of the sheets, and there are more individual areas sticking out at odd angles.

It may be hard to believe, but these two proteins are fairly close in score -- the one with good aesthetics scores 9050, the one with bad, 8904. Still, if given a choice, a folder should usually choose to try to improve a fold with better aesthetics. These folds typically have more potential for improvement without having to do a complete reconstruction from the starting position. In practice, the bad example above did not end up earning its creator very many more points at all, while the good one represents what may be close to the ideal solution for this puzzle.

Retrieved from "https://foldit.fandom.com/wiki/Aesthetics?oldid=23549"
Community content is available under CC-BY-SA unless otherwise noted.